Both men’s passion for cooking led to the creation of Tom Jenkins BBQ Sauce. They knew they had a hit when family members and friends raved about its great taste and always requested that they bring it to the gatherings.

In 1990, Tom Jenkins BBQ Sauce was introduced to the public via a roadside food trailer. The weekend trailer operation lasted seven years essay writer which resulted in them building a loyal customer base. A building across the street from their trailer became available, and in 1996, Harry and Gary opened Tom Jenkins BBQ Restaurant. 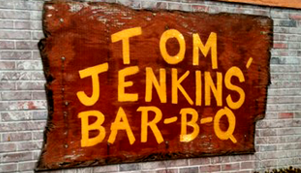 The restaurant has “Mom and Pop” comfort and features home cooked southern dishes such as BBQ ribs, collard greens and macaroni and cheese. Since its opening, it has become a staple in the community and is a favorite spot to get great tasting home cooking.

Harry and Gary have bottled their success and are selling their two sauces, Original and Country Gold to customers and local grocery stores. Before your next cook-out, ask your grocer for Tom Jenkins BBQ Sauce, it’s sure to be
A TASTE You’ll Never Forget.

Put on your comfy casual clothes and get to know your neighbor at our Southern style restaurant where everybody is family.

Any time is a good time for a bit o’ that brisket; some of those ribs; or a sandwich platter. Just remember — Jenkins’ is closed Sundays (“gone to church”) and Mondays (“gone fishin”).

Just want a quick bite; time to feed the family; or catering for an event… It doesn’t matter Tom Jenkins Bar-B-Q Restaurant puts succulent and savory food right on your table when you need it.